The Government’s Strategy for the Development of National and Regional Greenways sets out the process that all projects must follow, before a route is selected and planning consent is sought from An Bord Pleanála.

Four stages of public consultation will be held on the new Galway to Athlone Cycleway to inform the public and discuss the project before it is submitted to An Bord Pleanála.

The purpose of this first public consultation is to present the Study Area and hear your feedback on it. We want to hear your views on the following:

A Working Group has been established to devise a Code of Best Practice for National and Regional Greenways comprising representatives from the DTT&S, TII, Failte Ireland, Sports Ireland, Farming Representatives the IFA, ICMSA and ICSA, Department of Rural and Community Development, Rural Recreational Officer and the four local authorities to inform on how lands will be procured.

For the Galway to Athlone section of the cycle route there will be more reliance on privately owned lands than for the previous sections already completed, mainly on publicly owned lands alongside the Royal Canal and disused railway lines.

A Code of Best Practice and Guide to Process for National and Regional Greenway Projects is therefore being finalised to guide the process for procuring land for the Cycleway.

A series of public consultations were held between the 10th and 14th August. Maps of the study area were on display. No route corridors were proposed at this stage.

There were both virtual and physical displays of the project as follows:

Information on the project was also available at public displays at the following local authority offices between the 17th and 21st August.

The displays are also available in our Virtual Public Consultation Room 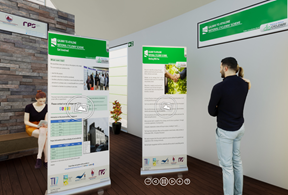 The Project team are also available to meet, by appointment at the Project Office in Ballinasloe.